The Gallagher Academy for Exceptional Young Women is a fairly typical all-girls schools–that is, it would be if every school taught advanced martial arts in PE and the latest in chemical warfare in science, and students received extra credit for breaking CIA codes in computer class. The Gallagher Academy might claim to be a school for geniuses, but it’s really a school for spies. 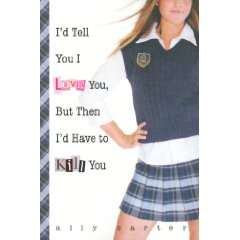 Cammie Morgan is a second-generation Gallagher Girl, and by her sophomore year she’s already fluent in fourteen languages and capable of killing a man in seven different ways (one of which involves a piece of uncooked spaghetti). But the one thing the Gallagher Academy hasn’t prepared her for is what to do when she falls for a boy who think’s she’s an ordinary girl.

Favorite thing about the book?

The voice is great. Not annoying, but still very teenager. Cammie is clever and likable. However, my favorite part was definitely the format of the book. We talked last week about first person POV and, one of my favorite things to see in a first person narrative is a creative format, a creative reason why the narrator is telling his or her story.

In this book, the narrative is couched in a Covert Operations Report, which Cammie has been encouraged to write in order to detail her involvement in the events of the semester before.

Not sure what happened with one of the main characters. She didn’t really play a part in the end, which was really too bad. Although, I assume she’ll play a major role in the later books.

What was most surprising about the book?

The last page–sorry, no spoilers here. There’s a quick little sentence, though, that surprised me.

Girl Power. I think the reader gets hammered on the head with this one.

After this book you felt…?

Who would you recommend this book to?

Folks that like the teenagery YA voice, but with less angst.

Fans of Harry Potter or House of Night that are craving the boarding school-set series.

Readers who enjoy the girl power messages of E. Lockhart.

Finally, how long did it take you to read?

This is sort of embarrassing, but I started reading this in July of ’08! Honestly, this has nothing to do with the quality of the book. Nate read it in a day. But, I would describe it not so much as a can’t-put-it-down type book, but a happy read. I kept picking up this book when I wanted a laugh or feel amused. It’s a nice book for the nightstand and always put me in a good mood. It’s just so darn cute.

Actually, though, my timing is good because Gallagher Girls #3 comes out soon, so y’all are just in time to read the first two if you so desire and then pick up Don’t Judge a Girl by Her Cover.

12 thoughts on “Review in Questions: I’d Tell You I Love You But Then I’d Have to Kill You”

Hi, I'm Chandler Baker, lawyer, author of young adult and middle grade fiction and dedicated nerdfighter (not necessarily in that order). My debut YA novel, ALIVE is forthcoming from Disney-Hyperion in May 2015 (get excited!) followed by TEEN FRANKENSTEIN in the Fall of 2015, which is Book 1 in my new HIGH SCHOOL HORROR STORY series to be published by Feiwel & Friends/Macmillan. In addition, I work for a number of book packagers and can be reached at chandler1986(at)gmail(dot)com. I'm represented by Daniel Lazar of Writers House.

My Tweets
Join 117 other subscribers
my read shelf:

YA and MG authors debuting in 2014

Not so daily, but definitely Dahlia.

"The act of putting pen to paper . . . helps us regain our equilibrium." - Norbet Platt

rachmcmahon.com/
Tales from the Writing Front

My journey through the world of writing and everything that lies in between...